There’s a delicious opera growing in the garden!

Tales of Hoffmann:  A Picnic Operetta

WHAT:  Tales of Hoffmann: A Picnic Operetta 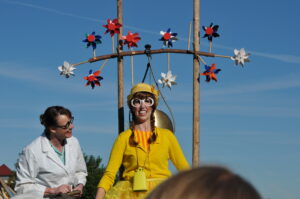 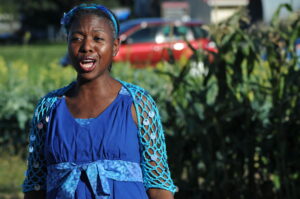 (Minneapolis, St. Paul, St. Louis Park, Falcon Heights MN)  In a unique marriage of the theatrical arts and the sustainable foods movement, Mixed Precipitation presents Jacques Offenbach’s masterpiece Tales of Hoffmann, an operetta touring to twelve community garden spaces during the 2010 harvest season.  Our irreverent treatment of this opera is perfect for opera lovers, gardeners, kids, and foodies, as artfully created locally sourced food samplings are prepared fresh and served to translate events of the story.  The unique community event is becoming a neighborhood tradition.

The 1851 opera is based on the macabre stories of German writer ETA Hoffman, whose material inspired Tchaikovsky’s The Nutcracker and Neil Gaiman’s The Sandman.  In our version, Hoffmann is a globetrotting poet following his romantic whims across Europe and encountering fantastical adventures with robots, evil magicians and ghosts.  Offenbach’s score contains many classic melodies of light opera, including the famous gondola melody, The Barcarolle.  You can also expect some other musical surprises from the popular songbook.  Our story is told in French, Spanish, English and the universal language of food!

Mixed Precipitation is a new performance initiative, helmed by Scotty Reynolds, dedicated to exploring text and space and creating live events to explore multiple forms of human interaction. Our previous projects include various site-specific explorations. Mpls Pinter Studies: an evening of Harold Pinter in Promenade Style, played to sell-out crowds through its two-weekend run in the warehouse district and Tonya and Nancy: The Opera a mid-west premiere presented in conjunction with the Winter Olympics in Vancouver.  Last summers’ Orpheus and Eurydice: A Picnic Operetta played to capacity crowds throughout the metro area.

TALES of HOFFMANN: A Picnic Operetta

Garfield Avenue and the Greenway, Minneapolis

Donation appreciated, but no one will be turned away for lack of funds.

A note on access:  We are prepared to provide reasonable accommodation to patrons with physical disabilities and those who require access services.  Our performance is designed for on outdoor garden venue, with some movement required of the audience.  A sighted guide is suggested for visually impaired patrons.  Patrons are encouraged to call ahead to inquire about parking suggestions and access to each unique venue.